We wanted to go beyond “Is it legal?” to “Would God be pleased with my decisions?”

Brisbane has returned to the everyday as 3,000 media, 6,000 policemen and 20 world leaders exit. I was lucky enough to hear David Cameron and Tony Abbott at their press conferences and saw the Obama motorcade leave the conference. 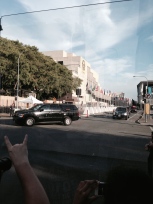 Thanks so much for following my blogs about the G20. The EXPOSED campaign landed in Australia after three years of prayer, coalition building, research and planning ideas.

What have we all achieved in that time?

Definitely worth the effort though because we represented the voices of ordinary people – church communities, small and medium size business people and development groups – who want to end the blight of unequal growth and selfish greed.

Information and education. We talked about the C word (corruption) in all sorts of contexts so that millions learned the extent, complexities and injustice of the problem around the world.

We produced theological material and a report called Open for Service. We encouraged prayers of confession and prayer for leaders.

We sought out stories of transformation as we wanted to bring light and hope. Remember Biship Zac in Uganda, whistleblower Michelle Harding in South Africa and work across Nepal on integrity?

Our toolkits addressed corruption in the church and business. And the Global Call recognised that G20 governments needed to act.

Campaigning actions. EXPOSED has always been a call to churches, business and government to model integrity and transparency, that goes beyond “Is it legal?” to “Would God be pleased with my decisions?” We achieved *1000 vigils, *147,700 signatures on the Global Call in 176 nations, *hundreds of Selfies with a message for Australia’s Treasurer, *the Open Letter from 95 global Christian leaders representing a billion Christians, and *the world’s biggest mock tax haven event

Policy. As a global campaign calling for integrity in business and government we explained that funds could be freed for the poorest communities in the world if we dealt with corrupt and unethical practices. Extra funds from taxes could also be used to encourage business growth and employment opportunities in all nations.

We tried hard to make the policies accessible and to give real world examples from topical issues like corruption in sport, fashion and the oil industry in Nigeria.

Did we succeed in seeing policy change? The G20 committed to ongoing work to addressing all the policies at the heart of the Campaign – global tax dodging and corruption.

There’s still more steps to take but that is the beauty and curse of the G20 – small enough to have honest discussions but large enough for those discussions to end in general promises that need meaty detail at the national level.

G20 nations have agreed to share tax related information with each other and have established high level principles for ensuring that more is known about the true owners and beneficiaries of anonymous companies and trusts. In a bid to consider the interests of low-income countries, the G20 have also communicated plans to support the administrative skills and systems of developing countries’ tax systems through ‘capacity-building’.

So there have been definite steps towards the light of transparency.

Thanks for playing your part.