Last time I was in Sydney, the Archibald Portrait Prize exhibition was on. It’s a hugely popular show because of the celebrity subjects as much as the art itself. The critics choose a prize but so do the workers in the packing room and the general public also choose their favourite.

Two paintings of women won prizes this year: the packers chose a portrait of a well known female TV journalist as their favourite, and the critics also chose a painting of a woman.

What is about a portrait that continues to draw us even when selfies and Instagram snaps seem to replace the need for paint. The answer of course is that art is exploring more than outward show – it is looking inside and captures a person’s heart, maybe in a way that does not flatter! And probably in a way that surprises the sitter. One young painter described it in her notes as,  ‘Painting enables me to [explore] the external, diffused intimately through my internal self, into paint.’

I was struck this year by the number of women artists (just shy of 50%) as well as subjects. Some of their works were small, easy to miss, intimate self portraits trying to capture the internal self in the outward appearance.

There was a painting of a woman 102 years old that struck me. Andrew Lloyd Greensmith’s portrait of Eileen Kramer was beautiful. The artist says of his subject, ‘Eileen embodies beauty as that intangible thing which cannot be fixed on the surface nor defeated by the wear and tear of age.’

I was glad to be reminded in all these portraits that beauty is not confined to youthful stereotypes and the unobtrusive work sings just as much as the bold.

Away from the buzz of the Archibald in the peace of the main galleries was a Grace Cossington-Smith self-portrait. She looks unassuming – spinsterish is probably how she might have been described in the 30s when she was painting. She was indeed single and stayed living at the family home all her life, free to paint because her father believed in her talent. 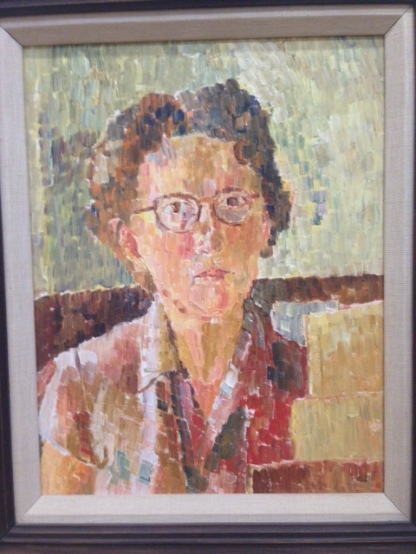 Cossington-Smith was in fact fiercely ambitious as well as talented and had the good fortune to be painting between the wars when women were given space to shine. She captured suburban scenes outside her bedroom window and grand spaces like the building of the Sydney Harbour Bridge. She is recognised now as a leading Australian artist who pioneered modernism but during her lifetime was largely unrecognised.

Other women saw their talent subsumed by their lovers or were allowed to be muses – inspiring talent in men – rather than showing off their own gifts. Alongside the Cossington-Smith self-portrait is one by Stella Bowen, partner of Ford Maddox Ford. Her work bought inconsistent success, overshadowed perhaps by the crowd of famous people in her circle.

Only eight women have won the Archibald Prize in its 96-year history.

A collective of women artists in the US, called Guerilla Girls, caustically comment on this inequality in their work, The Advantages of Being a Woman Artist. The ‘advantages’ include working without the pressure of success and having an escape from the art world in your 4 free-lance jobs. Ouch!

Are things changing? I am hopeful that as in all fields of endeavour, women are no longer just the muse, or the assistant to genius, but the creators, the recognised experts and the prize winners.

And of course, that is as it should be – God’s creativity knows no bounds of gender.