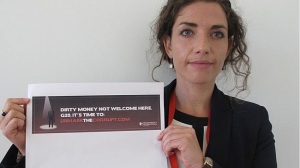 A few days ago, Brisbane Airport banned a billboard that it deemed ‘too political’ because it referred to tax evasion’s dirty money. (The photo shows the offensive advert being held by Maggie Murphy from Transparency International)

Why is that controversial when billboards promoting rampant consumerism or sexual innuendo are deemed acceptable?

And why is it ‘too political’ to talk about tax corruption when it is politicians who have the responsibility to govern fairly for all? It’s a bit like saying the police should not talk about robberies. 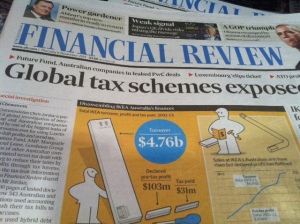 And a huge story of tax evasion that broke today involving many major companies around the globe parking profits in Luxembourg where corporate tax rates are around 1% shows how important it is for people to know the secret economic deals that occur quite legally (and some that don’t).

The Financial Review used the example of IKEA in Australia, citing that in the past 12 years it had a turnover of A$4.76 billion but managed a profit of only $103m, because it shifts profits offshore to Luxembourg.

It is not just the companies that have been spotlighted. It is the accountants and auditors which promote such behaviour that should be held accountable.

And that is why we’re here in Brisbane. To shout about unjust scales that mean the richest actually contribute the least.

Find out what events are happening this coming week ahead of the G20. If you live within 100 kms of Brisbane – come!

PS. it took a team of 80 investigative journalists in 26 countries 6 months to piece together the web of transfer pricing and profit shifting by 1000 corporations – that is the positive power of media to unearth uncomfortable truth.

Put THAT on a billboard.