Side by side on the front page of the weekend edition of the New York Times[1] I saw an article about trafficked children who end up in detention in Libya treated as criminals; and one about the record auction price paid for a Picasso – US$179 million. 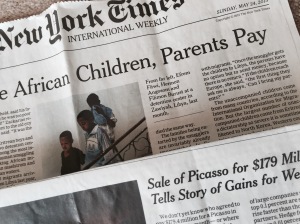 My heart churns at this spectacular juxtaposition of distressing exploitation and unbridled consumerism.

The children in the article on trafficking, a few as young as eight, are some of the thousands of under-18s who travel alone from North Africa, trying to get to Italy through Libya. 13,000 made it to Italy in 2014.

Children are the most vulnerable segment of the 200,000 who tried to get to Europe by boat last year. They are lured by a promise of asylum in Europe but the dream quickly turns to debt and threats. Smugglers demand more than US$3000 from desperately poor parents back home. No payment? The kids are abandoned to detention in Libya. Even for those who get on a boat, the situation is fraught – fifty children drowned with over 650 adults when a boat capsized in April in the Mediterranean. How many more go missing in less noticeable boats?

Most of the children coming from North Africa are from Eritrea (though the roll call of countries includes all the poorest and most fragile nations). The UK, USA and Australia all advise against travel to Eritrea – it is a place of lawless danger. There are very few schools, no jobs and boys want to escape from military service which is akin to slave labour. Of course they have no idea about the lies and cruelty of the smugglers who hunt for prey along the routes to Europe.

This story of exploitation and modern slavery is repeated in the UK where around 3,000 Vietnamese children are in forced labour. Or on the seas off Indonesia where Rohingya refuges crowded on boats are pushed away, unwanted by Malaysia, Indonesia or Thailand. Australia, my home nation refused to assist 700 Rohingya on a sinking boat. The Rohingya, one of the most persecuted groups in the world, are falling victim to trafficking into Malaysia and Thailand, countries with a poor record of human rights.

How can we respond to desperate need with such callous lack of charity?

The response of some politicians is that rescuing people in the Med or off Indonesia only encourages more people to come.

It’s true, we do need to address the causes of need in Eritrea, Sudan, Vietnam and Burma, which means generous aid and access to economic growth, not cutting the aid budget as Australia has done last month. But we must also give immediate aid to the victims of exploitation because God demands that we do so (or basic human rights if you don’t want to bring God into it). And we need to support those on the front line in Italy or Indonesia so they don’t have the whole burden of providing care.

I am not a liberal lovey or a naïve idealist – I just know that we need to respond.

So once again, talk, chat, argue about these issues to overcome fear and prejudice.

Please write to your Foreign Minister (and send a copy to your local political representative) about this. I have included a sample letter about the Rohingya that you could adapt)

If we do not speak out, politicians will think there is no mandate for compassion.

PS. As for the sale of the Picasso, I do not need to tell you the details – suffice to say that the NY Times estimates that the top 1% of wealthy people in the world have their own hierarchy of ‘inequality’ and that someone who can afford $179 million for a single painting must be in the top 0.0001% of wealthy people. Madness!

PPS. Please pray for local people in Italy, Lebanon, Jordan, Indonesia and other places facing an influx of refugees. Pray that they will be open-hearted and pray that other nations in Europe and Asia and North America will not harden their hearts.

I am deeply concerned about the continuing humanitarian crisis we see unfolding in the Andaman Sea, where thousands of Rohingya refugees are trapped in unseaworthy vessels trying to escape persecution in Myanmar/Burma.

I am sure you are aware of the recent crisis involving over 700 people stranded for several weeks. They had no food or water, and many needed urgent medical care. About 1/3 of the refugees were children.

The Rohingya are the most persecuted people group in Myanmar. In 1982, a new Citizenship Law removed their citizenship and rendered them stateless. The law has a very serious impact on the one million Rohingya who cannot move freely, and are denied basic services. In recent years more than 140,000 Rohingya have been forced into camps that many refer to as concentration camps. As life has become more intolerable for the Rohingya, thousands have made the decision to flee by sea.

Malaysian and Thai authorities have said that they will push back boats and deport migrants and refugees, to prevent further arrivals, in contravention of international law.

I want to urge you, to take action on behalf of the Rohingya refugees. Please put pressure on the Thai, Malaysian and Indonesian governments to allow Rohingya boats to land on their shores and urge the Association of Southeast Asian Nations (ASEAN) to work towards a humane and just solution to the refugee crisis, including measures to rescue those at sea.

I also ask that you speak up for the rights of Rohingya in Burma, Bangladesh and Malaysia. An urgent response is needed as this vulnerable group is also falling victim to trafficking.

[1] It was the international edition for Sunday May 24